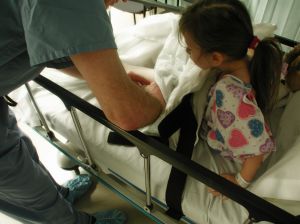 The general symptoms associated with viral gastroenteritis are vomiting and diarrhoea, and the illness is prevalent across all parts of the world. The different viral strains that cause gastroenteritis are often prevalent at different times of the year, depending on the season. For example, some viruses occur during the cooler months of the year, while other viruses are active throughout the year, and responsible for infections all the time.

Anyone is at risk of contracting viral gastroenteritis, as it occurs in people of all ages and backgrounds, but some specific types of viruses often cause infection in different subsets of people. For example, some viruses cause infection most commonly in infants and young children, while older children and adults are more likely to be infected by other viruses.

The main symptoms and signs associated with viral gastroenteritis are watery diarrhoea and vomiting. People may also experience headache, fever, and abdominal cramps. Usually, these symptoms begin 1 to 2 days after a person becomes infected with a virus that causes gastroenteritis. Depending on which virus is responsible for the infection, the symptoms can vary, and last for 1 to 10 days.

Gastroenteritis causes damage to the intestine, allowing water to flow from the blood into the intestine, which depletes the body of both fluid and electrolytes. The body then tries to get rid of the excess fluid by excreting it, which causes watery diarrhoea. The different viruses that cause gastroenteritis do this in different ways. This can be from:-

There are many different viruses that can cause gastroenteritis. These include:-

Rotaviruses are the most common cause of severe diarrhoea in children. After being infected by this type of virus, symptoms usually develop after two days (incubation period). Infection with rotavirus is characterised by vomiting and diarrhoea for 3 to 8 days, and frequent abdominal pain and fever. The primary route of transmission is faecal-oral (when faecal particles from one individual are introduced into the mouth of another), and because these viruses are very stable in the environment, rotavirus are often spread by ingestion of contaminated water, food, or by contacted with contaminated surfaces.

Norwalk viruses commonly infect adults and older children. These viruses are also passed in the faeces, and people can contract Norwalk virus by swallowing food or water contaminated with the faeces of an infected individual. Norwalk viruses only affect humans and do not make other animals sick. Outbreaks often occur in association with the consumption of raw or uncooked shellfish, which have been contaminated by sewage or the faeces of an infected fish-handler. Other sources of infection also include ready-to-eat foods, ice, eggs and salads. The incubation period for Norwalk virus is 1 to 2 days. Symptoms include nausea, stomach cramps and diarrhoea, and usually last for 2 to 3 days.

Norovirus cause nausea, vomiting, diarrhoea and mild stomach cramps. Some people also experience fever, chills, headache, muscle aches and generally fatigue. The incubation period for norovirus is very short, only 12 to 48 hours, and symptoms can present suddenly, with the infected individual rapidly beginning to feel very ill. Symptoms usually only last 1 to 2 days, but people can remain contagious for up to 2 weeks. Norovirus is found in the faeces and the vomit of infected individuals.

Caliciviruses are major causes of acute (rapid onset) gastroenteritis in all age groups. These viruses are related to noroviruses, and cause similar, but generally milder symptoms. Outbreaks of viral gastroenteritis associated with calciviruses are often detected in winter months and are spread by person-person contact and exposure to contaminated food and water.

Astroviruses are rarely spread by contact with contaminated food or water, and are usually contracted by contact with an infected individual. These viruses typically only cause infection in infants and children, but sometimes cause gastroenteritis in adults. The symptoms associated with astroviruses are mild diarrhoea, vomiting and stomach cramps. Outbreaks of gastroenteritis in association with astroviruses occur more often in the winter.

Viral gastroenteritis is highly contagious, which means it is easily spread. The viruses that cause gastroenteritis can be spread from person to person by having close contact with infected individuals. This could include sharing food, water or eating utensils. People can also become infected by eating or drinking contaminated food or beverages.

The primary concern for treating viral gastroenteritis is to prevent dehydration (severe loss of fluid). For infants, children and adults, the administration of an oral rehydration solution is recommended. This is a treatment for diarrhoea-related dehydration in which an electrolyte solution containing fluids and vital ions is administered orally. It consists of a solution of salts and other substances such as glucose, sucrose, citrates or molasses, which is administered orally. Oral rehydration solutions are readily available from pharmacies without a prescription. Simply drinking water can be an ineffective form of treatment because it does not contain the necessary electrolytes essential for maintaining body function. Prescription medications such as antibiotics are not effective treatments because they are unable to stop the viruses from growing and cannot destroy them.

People can reduce the chance of becoming infected with a virus that causes gastroenteritis by:-

Currently, a vaccine is being developed to try to prevent viral gastroenteritis. The vaccine is targeted at reducing the prevalence of rotavirus infection in infants and young children.

About the Author: Health Academy Australia